Joann Troy comes from a career military family and grew up in Falls Church and Ft. Myer, Virginia.  She began playing the flute in 3rd grade and continued through high school, achieving Region Band membership 5 times and All-Virginia Band honors twice.  With the latter ensemble, she was thrilled to have Aaron Copland as a guest conductor, who led “Simple Gifts” from his ballet Appalachian Spring.  Joann accepted a scholarship to the Midwestern Music Camp at the University of Kansas, where she appeared with both the Concert Band and Symphony Orchestra under the batons of Colonel Arnald Gabriel and Dr. Mark Hindsley, among others.

She entered Vassar College in Poughkeepsie, New York and earned her Bachelor of Arts in Music, studying flute with NYC artists Thomas Nyfenger and John Solum, in addition to musicology with renowned scholar Janet Knapp.  Joann then married into the Navy, eventually residing in Seattle, Hawaii, Japan, Virginia Beach, and London, UK before landing in San Antonio in 2004.

Once settled here, she became a Band Mom with the Clark HS Mighty Cougar Band.  Encouraged by a friend to pick up her instruments again, she joined the Heart of Texas Concert Band and has never looked back, performing also with San Antonio’s Fiesta Flutes and the SA Community Wind Ensemble.  Joann has lately begun learning the fascinating world of Percussion, and discovered numerous ways to hit things with the South Texas Symphonic Orchestra, Symphony Viva (also serving on its Advisory Board), and the national champion San Antonio Brass Band.  In July she will play flute and piccolo with the World Adult Wind Orchestra Project in Schladming, Austria as part of their Mid-Europe Festival.

Joann loves world travel, photography and birding.  Recent adventures have taken her to Mexico, Italy, Malta, Ecuador, Albania, and North Macedonia.  These, plus life as a military spouse, laid the groundwork for a new career, and she now works as an independent travel agent.

She is thankful for this chance to solo with the Heart of Texas Concert Band, for the community that supports them, and for all those who create opportunities for passionate players from all backgrounds to make music together. Her instruments fell silent for far too long and she feels truly overjoyed to let them sing again. 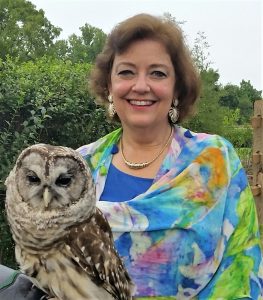