Jillian is an adjunct professor at Saginaw Valley State University, where she teaches Applied Oboe Lessons along with a Woodwind Methods course covering flute, oboe, clarinet, saxophone, and bassoon to twenty-five music education undergraduate majors. She is currently pursuing a Doctor of Musical Arts (DMA) degree from the University of Michigan. Jillian most recently completed a double Master’s degree in both Music Performance and Chamber Music at the University of Michigan, where she was a recipient of the coveted Earl V. Moore Award for outstanding achievement in the School of Music, Theatre, and Dance, along with Highest Honors Distinction with a 4.0 GPA. She is a Graduate Student Instructor, and studies under the direction of Nancy Ambrose King. While at Michigan, Jillian competed in the final round of the annual Concerto Competition- graduate division, performing the Strauss Concerto. She also soloed in the University’s annual Collage Concert, where she performed Gilles Silvestrini Etude no. 3: Boulevard des Capucines for 3,000+ concert attendees. Additionally, she holds a Bachelor’s degree in Oboe Performance from the University of Texas at Austin Butler School of Music. While at UT, Jillian studied under Rebecca Henderson and Andrew Parker and was a recipient of both the College of Fine Arts Student Excellence Scholarship and the Jack and Ginger Blanton Endowed Presidential Scholarship.​

Originally from San Antonio, Texas, Jillian always had a passion for performance and teaching. Additionally, as a former pre-med student, Jillian has always had an interest in the health field. In 2017, she professionally recorded biomedical music for patients with extreme neurological conditions including Parkinson’s Disease, Cerebral Palsy, etc. as part of the Movement Tracks Project with the Austin-based Center for Music Therapy. Jillian aspires to pursue a lasting career as a chamber music oboist, orchestral musician, and professor of music. 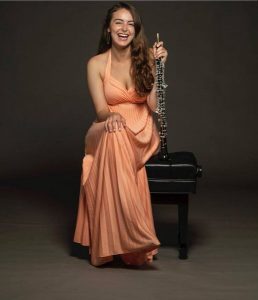