Darian Jamaul Thompkins was born and raised in Deridder, Louisiana. He attended Northwestern State University of Louisiana where he earned his Bachelor of Liberal Arts in Music and foreign languages. He holds 2 minors in Music performance and Spanish. He is the oldest of 5 and first generation in his family to attend and finish college.

During his time in college, Darian was a proud member of the BEST sounding band in the land that marched over 350 students. He studied Modern and Baroque Flute with the Professor of Flute and Graduate Studies, Dr. Dennette McDermott. He is also a proud member of Kappa Kappa Psi an Honorary Band Fraternity and crossed into the Theta Nu Chapter in the Fall of 2020. In 2019 he was picked, along with 3 others, to perform and travel with the elite Northwestern State Wind Symphony under the direction of the Director of Bands, Dr. Jeff Matthews, hosted in Bunol, Spain for the international conference for WASBE (World Association for Symphonic Bands and Ensembles).

Darian has over 10 years of experience playing modern flute, 2 years of Baroque flute and 3 years of Violin. He currently works for UnitedHealthcare as a Dental Network Contractor and looks to work towards a Masters Degree in Music Education in the near future.

Darian also has a great love for languages and looks to acquire further certifications and knowledge of Spanish, French, Russian and Latin. 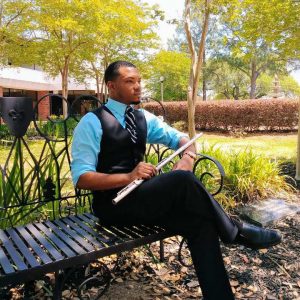