Dr. Brett A. Richardson serves as the Coordinator of Music Education/Director of Bands, Instrumental Area Coordinator, and an Assistant Professor of Music at the University of the Incarnate Word where he teaches courses within the music education curriculum, conducts the Wind Ensemble, directs the Marching Cardinals, and administers all facets of the UIW Band program.

Richardson holds the Doctor of Music degree in Wind Conducting from Indiana University where he was a student of Prof. Stephen W. Pratt. He also holds a Master of Music with an emphasis in Wind Conducting from Texas A&M University-Commerce under Dr. Bradley N. Kent and a Bachelor of Music Education from Stephen F. Austin State University under Prof. Fred J. Allen. Prior to his appointment at UIW, Dr. Richardson proudly served as an Associate Instructor with the Indiana University Jacobs School of Music Department of Bands/Wind Conducting and as the Resident Conductor for the Southern Indiana Wind Ensemble, a community wind band based in Bloomington, Indiana. Previously, he served as the Assistant Director of Bands and Instructor of Music at his alma mater, Stephen F. Austin State University in Nacogdoches, Texas. A product of the music education tradition in Texas public schools, Dr. Richardson began his career as a music educator as part of the Clear Creek and Lewisville Independent School Districts.

In addition to frequently serving as a clinician and adjudicator for bands of all levels, Dr. Richardson has had the privilege of conducting numerous junior high and high school All-Region and All-City Honor Bands in both Texas and Indiana. He has also served as a guest conductor at the Midwest Clinic in Chicago, IL and the Texas Music Educators Association (TMEA) Clinic/Conference. In recent years, Dr. Richardson has guest conducted members of the San Antonio Symphony Orchestra, San Antonio Brass Band, Orchestra of the Incarnate Word, and the 2017 Battle of Flowers Celebration Mass Band comprised of nearly 5,000 San Antonio area high school students during the city’s annual Fiesta Celebration. He also regularly serves as an adjudicator for the annual UIL Texas State Solo and Ensemble Contest.

Dr. Richardson is in demand as a clinician for music education conferences across the U.S. with appearances at the Kansas, Louisiana, Massachusetts, Nevada, and Texas Music Educators Assocation Conventions, as well as the Texas Bandmasters Association Clinic/Convention, CBDNA National Athletic Band Symposium, and the Midwest Clinic. In 2016, he received an Honorable Mention and was named a Semi-Finalist in the College/University Band Conducting category of the American Prize competition. As well, he has been published in the TMEA Southwestern Musician, featured in the The Instrumentalist, and has served as a contributing author to the peer-reviewed journal Praxis: The Electronic Journal of the Center for Music Education at Sam Houston State University.

An advocate for American music, Dr. Richardson has conducted premieres of works by composers Brian Balmages, David Biedenbender, Ryan Gee, Joni Greene, and Benjamin Dean Taylor, as well as participated in commissions of works by Donald Grantham, Jim Bonney, Benjamin Dean Taylor, and James Syler. In 2014, he completed a wind band transcription of Aaron Copland’s Music for the Theatre, premiered by the Indiana University Wind Ensemble, and collaborated with composer Gabriel Lubell as conductor for the debut recording of Lubell’s Jim, Jimi, and James on the album Studies in Light and Sound: An Album of New Chamber Music. 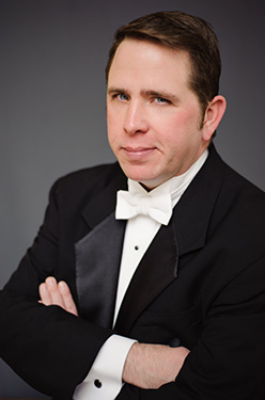