Bradlee Hooker was raised in Michigan and moved to San Antonio, Texas with his mother when he was 11 years old. A product of Northside ISD he attended UT-San Antonio and graduated with a Bachelor of Music Education in 2013. He started his teaching career in San Antonio ISD as the assistant band director at Harris Middle School through 2016. Bradlee became the Director of Bands at John Greenleaf Whittier Middle School in August of 2016, where he currently teaches. Under his direction the band has earned consecutive UIL “Sweepstakes” awards and enjoyed playing in premier venues in San Antonio such as the Tobin Center for the Performing Arts.

As a performer Bradlee has been a member of The Heart of Texas Concert Band since the 2013-2014 season. Also, he sings at a local church and occasionally performs with a brass quintet. When able, you can find him playing golf, fishing, playing a game of cards, or watching basketball wherever he can find it on tv. Bradlee resides in San Antonio with his puppy, Carmina, and has lunch on the weekends with his family. 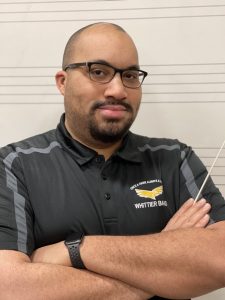