Betsy took over as Editor of The Brass Band Bridge in 2009. She lives in San Antonio, Texas, with her husband, Air Force euphoniumist John Caputo, and two cats. 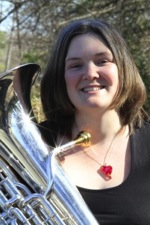